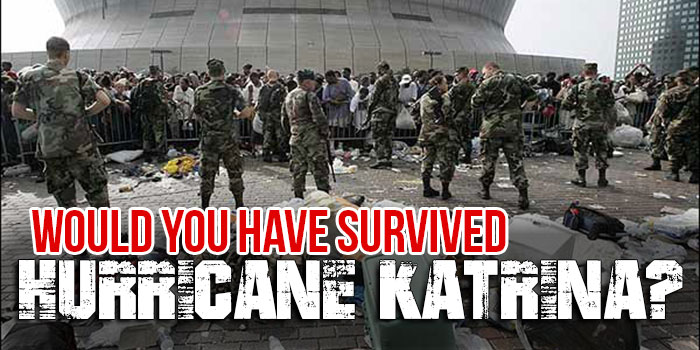 I know this may sound like a “weird” question to you, but…

… would YOU have survived Hurricane Katrina if you lived in New Orleans?

Like most or our readers, I’m sure your instant gut-check answer would be, “Well HELL yeah I would!”

I mean after all… you’ve read up on disaster preparedness… you’ve stockpiled some extra food and water to hold you over… and if you’re “advanced”, you even have your bug-out bag ready to go, right?

But even the best of preppers can suffer from blind spots, and…

1. Your Back Yard Will Be Transformed Into A Toxic Waste Dump

During Katrina, floodwaters swept chemicals and waste into the streets.

Even dead bodies washed up on people’s doorsteps!

Sure, stockpiling some extra food is important because, as we saw during Katrina, both store-bought and home-grown food supplies were either hoarded, ruined, or looted within days (sometimes hours).

But even more important is water!

We even saw people stranded on rooftops holding signs for rescue workers to just bring them water to drink.

Now imagine being surrounded by water… and not being able to drink a single drop of it because it’s been transformed into a toxic soup of sewage, garbage, dead bodies, and gasoline!

Stored water is helpful… but the real secret is to become your own personal “water factory” – able to produce clean drinkable water on-demand that allows you and your family to stay alive while those around you are dying of thirst.

In the event of a large disaster such as Hurricane Katrina, the government may declare a temporary suspension of your rights (often referred to as “martial law”).

Yes, that means military and police will be out searching for looters (a good thing, right?).

But it can also mean the government may take away your only means of fighting off these scumbag predators in your area.

Now you probably know what to do when looters start nosing around your place, but…

… will you know what to do when a squad of military or riot police show up at your door and demand your weapons “for the safety of the community”?

I’ll give you a hint…

It’s NOT to tell them, “You’ll pry my gun out of my cold, dead fingers!”

Your best defense is to stay off their radar and not appear like the neighborhood “whack-job” who will be sitting in a rocking chair holding your AR-15 next to your giant “Looters Will Be Shot” sign.

The more “tactical” that you appear, the more likely that you will be a target of disarmament.

Being prepared doesn’t mean you should appear that you are prepared.

Of course it’s a different story when they actually knock on your door… but that’s a whole other topic to discuss.

3. Beware Of The “Road Zombies”

If you were one of the “smart ones”, you would have seen the disaster coming and decided to bug-out to a safer location.

However, in a mass exodus of any major city, you can expect that a lot of refugees will be run out of gas within 3 or 4 hours on the road.

12 hours on the road, and you can bet your sweet bippy that 90% of all vehicles’ gas tanks will be bone dry!

With no fuel resupply able to make it into the area, highways will quickly become virtual “parking lots” of desperate, panicked (and angry!) citizens.

Expect to run into aggressive drivers, people riding on the top of cars and trucks, stranded families in the road asking for rides, and even armed “crazies” demanding your vehicle!

I know that sounds impossible given everything I just stated, but there ARE some things you can do to avoid a confrontation and still keep moving.

Fortunately (for me), I learned how to deal with surviving any crisis – even in distressed urban environments – from my days in the military.

As a long-range recon “forward observer”, there were times I had to live without food and water resupply AND be ready at all times to defend myself from the “enemy”.

After living through those crisis situations I came back home knowing I needed to share this information with as many people as possible.

That’s why I wrote the “Collapse Survival Secrets” Free Report, and that’s also why I give away this life-saving survival “manual” for FREE.

I’ll show you exactly how to plan out your food supply… become your own “water factory”… and yes, even reveal the best ways to protect you and your family from looters and that “knock on the door” by military or police!

What Other Survival Lessons Have You Noticed From Hurricane Katrina And Other Disasters?