When it comes to mixed martial arts and other combat sports, there are weight classes.

This is what separates sports from reality.

In real life, when you're facing somebody, you won't have the luxury of dividing up into weight classes so you have a “fighting chance”!

You may be facing someone who is bigger or stronger.

In fact, you PROBABLY will, because “bad guys” pick victims they think they can beat.

Facing someone who is bigger and stronger than you is one of the biggest fears most people have.

For that reason, I talked to my friend Mike Gillette to get his advice.

Here's a summary of the three tips he gave me for facing a larger attacker.

3 Things To Remember When Fighting A Larger Attacker!

You know that when you match against someone, size is a factor.

Another factor, though, is how much knowledge you have.

You can't be bigger than every person you meet.

You can't always be stronger no matter how strong you get.

So you've got to fight smarter.

This is where training and preparation come in.

It also brings us to our first tip for facing someone who's larger and stronger.

#1: You Won't Be Fighting A Professional

In the cage, on the mat, or in the ring, it's very rare that a fighter does something the other fighter has never seen before.

You'd have to go all the way back to the early days of the UFC, when it was just a free-for-all, to see a competition where fighters were doing things their opponents had never seen.

Those days are long gone.

Everybody knows everything if they're a competitive fighter.

Gaps in knowledge still exist, however, out in the real world, in street fighting.

The more you know, the better off you will be if you get attacked by someone larger than you.

He won't be a professional fighter, chances are, so if you know things he doesn't, you'll be able to take him by surprise and use his ignorance against him.

#2: He's Going To Pick You Because He Thinks He Can Win

It's rare that a much smaller guy attacks a much larger guy.

Criminals will target someone smaller because they think that they can win easily.

This means you've got to keep in mind, in every altercation, that you're going to be at a disadvantage right from the start.

You're not going to be able to just rely on size and strength to win because the attacker will already have chosen someone smaller.

You've got to communicate clearly and immediately with the opponent in that situation, which means inflicting pain.

But pain alone won't be enough if he's bigger and stronger.

That, in turn brings us to…

#3: Take His Balance And You Own Him

If you can introduce instability, you can inflict pain in a way that you can't by trying to overwhelm somebody when they're larger.

When we take away someone's balance, even for a brief moment, it creates a sense of panic.

The biggest priority to anyone who is off balance is suddenly to regain that balance.

Nobody tries to fight when they're falling.

The first thing they try to do is regain their footing, get their head over their hips, and figure themselves out.

It can all happen very quickly, but if you can take the attacker's balance, you get a brief window of opportunity during which they're focused on something that isn't you.

This can give you the chance to take a devastating shot and take them down.

Are YOU Prepared To Take Down A Larger Opponent? How Would You Go About It? 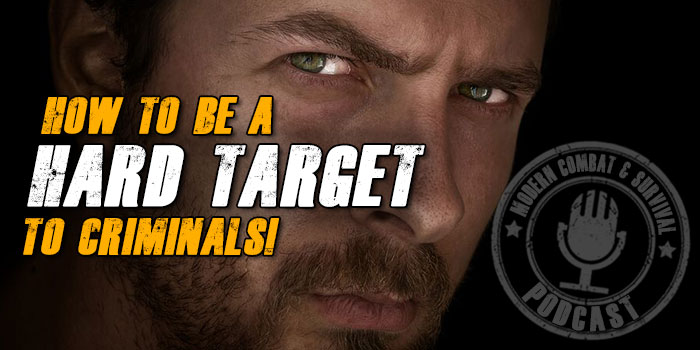 Spotting an “easy target”… getting close… ambushing without warning… and using violence as a tool to gain money, power, or whatever other reason he may have to attack – these are skills he's fine-tuned time and time again.

The only thing that's going to deter him is if you look like a “hard target” – the kind of person who appears (and “is”) so dangerous that he'll avoid you at all costs, and move on to an easier mark.

And making you THAT “dangerous” is exactly what this week's podcast episode is all about as I interview former top-bodyguard, Mike Gillette, on his best tactics.

Here's What You'll Discover In This Week's Episode:

The best way to survive a real street attack is to not make yourself a target for one in the first place.

Listen in and discover what top bodyguards and tactical experts know about projecting a “Don't f*ck with me!” vibe to criminals who may be watching you… without losing your sunny disposition and the ability to adore kitten memes in your spare time.

Resources Mentioned In This Podcast:

What OTHER Ways Can You Become A “Hard Target” And Avoid A Criminal Attack?

The phrases say it all…

The word “defense” implies that you're on the receiving end of a violent attacker… and that puts you at a serious disadvantage in being able to survive a real street fight – especially when we're talking hand-to-hand or hand-to-weapon combat.

The key to surviving is to turn the tables on your assailant and dominate HIM – forcing him to react to YOU in order to defend himself.

This kind of “street fight domination” takes special knowledge of how to fight back so for this week's podcast episode, I called up my friend (and badass bodyguard), Mike Gillette, to share some key self-defense tips from his new training program.

Here's What You'll Discover In This Week's Episode:

Whether you're looking for new tactics for how to win a real street fight or you're a concealed carry “gun guy/gal”, these skills will make you far more prepared for an attack!

Resources Mentioned In This Podcast:

Do YOU Have A Question Or Comment About How To Win A Real Street Fight?

Please Share Your Thoughts, Tips And Requests Below Now…

While you and I may both realize that we live in a dangerous world, far too many of us are actually what I would call “too confident” in the ability to face any attack or threat.

You see, it's not just about having the most badass gun… a bugout bag… and a G.I. Joe kung-fu grip.

It's about the mental preparation you do BEFORE ever facing a real life crisis.

In this week's episode, we go deep into the mind of a real-world “bodyguard to the stars” and tactical operator, Mike Gillette, to uncover some of the survival mind-set strategies you can use (today!) to be a better protector of those who are counting on you.

Here's what awaits you in this week's episode…

This is a rare look into the mind of a top-notch operator with boots on the ground… and a brain fine-tuned for fast action.

How Have YOU Mentally Prepared
For Living A Tactical Lifestyle?

My friend and former SWAT team leader Mike Gillette says that when it comes to self-defense, there’s “physiology” and there’s “psychology“.

Physiologically speaking, the quickest way to shut down an attacker is to knock them out.

But if the opportunity to knock them out doesn’t present itself, there's a way to shut them down completely with one vicious “psychological” attack Mike writes about below…

One Vicious Street Fighting Move To Instantly Destroy Any Attacker's Will To Fight!

Yes, it's possible to completely shut down your attacker's psychological “attack” motives with this simple self defense tactic…

Here's what I mean…

As soon as your attacker closes in on you and gets into “close quarters combat” range – where he thinks he has you – shoot both hands right into his face.

Now one method is to simply try to take his head right off his shoulders (that could work), but psychologically, gangbangers are used to getting “punched” so his brain will stay in “attack” mode if you don't get a knockout. Instead…

I want your fingers to dig into the flesh of your attacker's face.

I want your thumbs to seek out your attacker’s eyes.

I want you to scratch, dig into, twist, claw and tear any part of their face that you can get your hands on and shred him to pieces.

Here's why this works so well…

You see, most people are attacked because the attacker decided that they looked “attackable”.

That means they appeared to be a low-risk, potentially compliant victim – an easy mark to intimidate them and exert control and pain for the sake of making themselves look and feel like a tough guy.

So no street thug is going to expect you to go into full Wolverine-mode on their ass and start clawing at their most sensitive areas.

Seriously, attacks to the face FREAK OUT even the toughest bad-guy.

And the pain and shock of feeling one’s face getting clawed open provides a great opportunity for you to make your escape.

So much of what REALLY works in a street fight isn't about complexity. Rather, it’s about commitment.

You need to commit right now, to doing whatever it takes to save your life or the life of another.

Be committed. Be Dangerous.

What Other “First Strike” Moves Do You Train With?