Menu
Take me back to the old site

A few months ago, I interviewed my friend, Nathan Seabrook, on the topic of “High Threat Mobile Ops”.

Now Nathan isn’t like a lot of our other “experts”…

As a high-risk “protection contractor”, he’s always off in some hostile armpit of the underworld – places you wouldn’t want to be caught dead in.

He’s even written an amazing “hostile contact” survival guide for other contractors with lessons he’s learned from deadly incidents he’s been in or analyzed.

Unlike other “experts” out there, Nathan is putting his life on the line every damn day to make sure that others don’t lose theirs.

He relates the story of how a swarm of about 40+ locals cut off his vehicle and blocked it from moving.

They then spent the next 45 minutes trying to bust through the vehicle’s windows to drag Nathan out into the road to kill him (they even started pouring gasoline through a hole in the window to burn him out!) 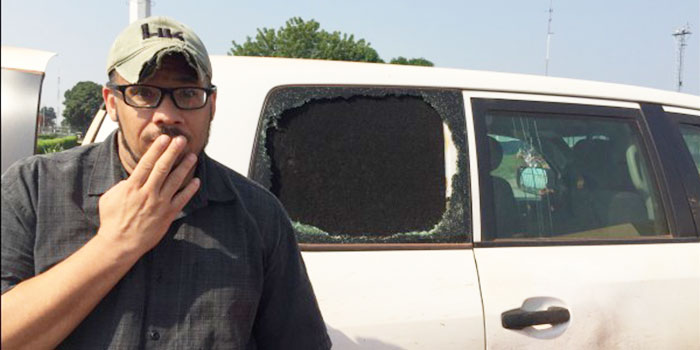 Ok, maybe you don’t work on high-risk protection details where everyone around you could be an “enemy”…

… but planning for an attack in your vehicle – even a mob attack – can be a reality during times of crisis and civil unrest.

We’ve seen over and over on the news, groups of thugs take to the streets looking to victimize innocent civilians.

These incidents can happen at a moment’s notice without warning and if you suddenly turn the corner to find yourself facing a violent mob, Nathan’s experience could save your arse…

You would think that your vehicle would offer you some solid protection from a gang, right?

Nathan was fortunately inside a bulletproof vehicle that could withstand 45 minutes of torture… but YOUR windows will be easily smashed and you’ll get pulled out in seconds.

Assess your options – quickly – and take decisive action as soon as you spot your moment.

That means looking for how you can create a gap (Nathan recommends having a dry-powder fire-extinguisher nearby for fast crowd dispersion).

Then seize your opportunity to run to safety (or drive if space opens in front of you).

2. Have Your “SCRAM Bag” At-The-Ready

Every high-risk contractor like Nathan carries a low-profile “go bag” with them everywhere they go.

For you, even as you escape your vehicle, you can bet that you’ll have an angry mob ready to track you down for revenge, right?

Therefore you need special gear (and skills) to evade being captured and “punished”.

This is where your “SCRAM bag” comes in…

“SCRAM” stands for “Social Chaos Response And Mobility” and it’s basically the next level up on your survival gear from EDC (or “everyday carry”).

This carry kit not only houses emergency food and a water filter for energy on-the-run, but it also contains a “quick-clot” bandage for major injuries and even “escape & evasion” supplies that can help you to do anything from quickly “disguising” yourself to avoid detection to setting simple “man traps” within seconds to slow down your trackers.

Ok, hopefully you ARE a concealed carry license holder… and actually carry!

If not, you still need to be “armed” when you’re facing a gang that’s intent on making you a victim.

Besides, even if you do have a firearm, facing a mob means lots of bullets and, as Nathan says, “there’s no way back after you pull the trigger”.

Sure, a few people may run at the sound of a gun going off… but we’ve also seen how it can actually infuriate a crowd into “blood thirst” at a whole new level.

Besides, running out of bullets is a certain death sentence – and that’s just not acceptable.

Nathan understands the need for a “12-level” weapons plan so you're never “unarmed”.

For example, his primary “back-up” is the same as mine…

Nathan personally uses our Guardian Machete not only in his operations, but also has it at-the-ready in his vehicle for scenarios like this.

Machetes are instantly recognizable… intimidating… deadly… never run out of ammo… are effective against a mob… and fortunately for you – LEGAL to carry in your vehicle (“It’s for landscaping! Honest!”).

Look, I know that it doesn’t feel good to think about having to fight off a violence-fueled gang of thugs on a city street.

It’s frankly scary as hell (as Nathan can confirm from experience).

But unfortunately the threats we face today are worse than ever – and civil unrest has become the “new norm” when people don’t get their way or like the way things turn out.

As we say in our New World Patriot Alliance…

… a new world of threats demands a new kind of “patriot”.

The truly “prepared” are ready for anything… and willing to take whatever steps necessary to survive and protect those they love.

What Other Tactics Do You Know For Surviving An Angry Mob?