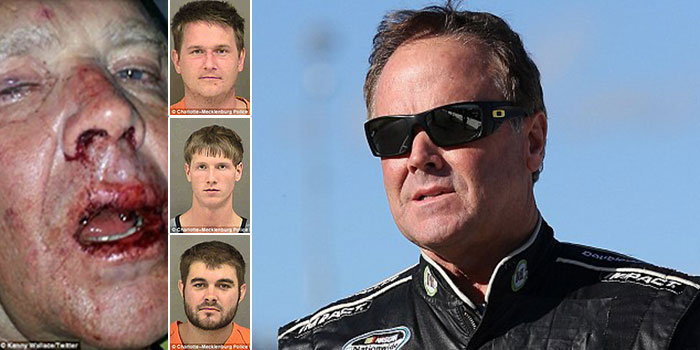 But NOT by a car crash during one of his races.

While walking his wife and daughter to their car after a Rascal Flatts concert, 57 y.o. Wallace and his family were brutally attacked by 3 drunken men (and even their female family members) for no reason at all.

As he was struck and lay there knocked out on the ground, Mike didn’t feel the continued kicks to his face by his aggressors.

…and he couldn’t protect her as they turned their attacks on her – kicking her in the ribs.

What Would YOU Do If Ambushed With Your Family
By Violent Multiple Attackers In A Real Street Fight?

Wallace told his story of the brutal beat-down:

“They tell me <the attack> was about 15 minutes from start to the finish.  I only remember the first few seconds of it. When I woke up, I see my daughter laying on the ground, which is devastating to a father.  That’s the worst thing in the world.”

Mike wasn’t some martial arts expert… and even if he’d had a gun, there was no time to draw a weapon before he was struck by the 3 men.

At that moment of the attack, the only thing standing between the 3 adrenaline-charged drunks and his wife and daughter… was him… his hands… and the skill to destroy three men before they could send them all to the hospital – or worse.

1.  Don’t Fight All Your Attackers At Once

Only in Jackie Chan movies can someone punch or kick 2 guys at the same time.

When in hand-to-hand fight against multiple aggressors, you should only fight one person at a time.

That’s not always the “leader” of the group (like some martial arts gurus say).

2.  Take Your Target Out Quickly

You don’t want to be locked up with any one attacker for more than 1 or 2 strikes.

Any more than that and you can bet that his buddies are going to eventually get in a solid shot or take you to the ground for a brutal beat-down.

“Punching” (like most people do)… or trying some fancy “mixed martial arts” move to take them to the ground… will only work against you.

You need to use equally brutal moves that will completely take the guy in front of you out of the fight for good.

Seeing their friend gagging, screaming, or unconscious on the ground may be enough to stop the others in their tracks.

But if not, you’re at least down 1 less attacker… and ready to use the same moves on the next idiot stupid enough to mess with you…

3.  Train Those You Love To Protect Themselves

This is typically the hardest thing to accomplish, isn’t it?

Maybe your spouse and kids don’t have the same “survival mind-set” you do… or maybe they (and you) don’t think they’re strong enough to defend themselves.

The fact is, you don’t have to be big and strong to completely destroy a man even twice your size.

In fact, there are moves so simple… so devastating… and so easy to learn, that Wallace’s daughter may have even been able to fight back herself instead of laying on top of her father and begging for mercy.

If you want to know what these simple-yet-brutal self-defense moves are, then I’ll send them to you in a single DVD straight to your door for FREE.

It’s sad to think you can’t even go to a fun concert, dinner, or a movie without having to worry about being ambushed with your family.

But these are hard facts you must face now.

You shouldn’t live in fear – for yourself or for those you love – and knowing you have the ability to destroy any man with your bare hands is what gives you the confidence to walk anywhere without fear.

Click here to tell me where to send your FREE “street self defense” DVD – master just a few of these brutal, life-saving moves… then show them to those you love the most so you’ll know they’re protected even if you’re not there to save them!

What Other Multiple Attacker Street Fight Self Defense Moves Do You Believe Will Help Others Survive?

Please Share Your Observations On This Attack Below Now…