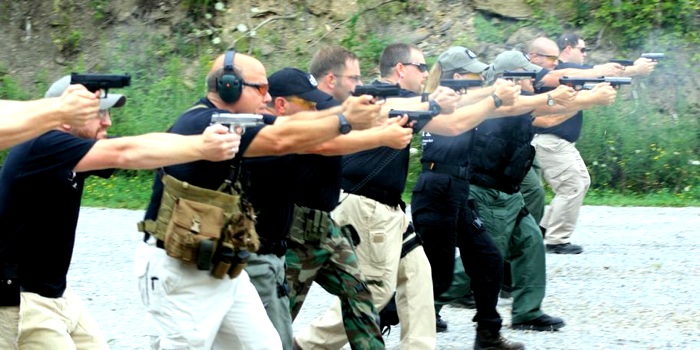 You’ve probably heard the saying before, “Train the way you want to fight because you’ll fight the way you trained.”

This is wisdom that you can take to the bank.

When your stress level gets so high that your adrenaline starts pumping at breakneck speed through your body, you lose most of your critical thinking ability.

My buddy, Ox, recently teamed up with a retired Navy SEAL and discovered that the way that most people were training (even in so called “advanced firearms classes”) was actually creating what he calls “Linear Range Training Scars“.

This team of SEAL instructors then developed some very unique ways anyone can overcome bad handgun response habits and take your training to the next level. (See their unusual training methods here…)

I’ll let David fill you in on…

…And The Simple Solution He Developed To Fix It Fast!

I know it may be hard to believe, but even if you’ve attended more advanced firearms training courses, what you learned could actually be threatening your life if you’re ever attacked and your life is on the line.

You see, it comes down to what’s referred to as “linear range training scars”.

Essentially, these are the scars that you get when you spend the majority, or all of your training and practice time on a linear range… a range where you can only shoot “downrange”.

Because of this, it programs your mind to only think in a straight line, in front of you. (Hell, you’re not even supposed to point your weapon anywhere but “down range”, right?)

When we filmed our Navy SEAL force-on-force firearm training, we noticed some very common mistakes that even our advanced students were making, like…

…and another instructor came up behind him and “killed” him with a training knife.

The student pulled his gun… half dropped to a knee and fired… the instructor fell down… and then the student simply stood there for more than 2 minutes in total “brain freeze” and never looked behind him to see if there was another threat.

Want to know why this happened?

Because in 99% of all firearms training classes… THERE IS NO THREAT BEHIND YOU!

But in real life, criminals often run in gangs and have accomplices keeping watch or are waiting with a car to get out of the area.

As soon as they’re in trouble, their buddy can come up behind you with a baseball bat, knife, or just shoot you from a distance.

How To Overcome Your Linear Range Training Scars…

Range training is valuable – but if you think you might ever need to use a pistol in self defense, you also need to practice techniques that will work in the real-360 degree-world where a threat can come from anywhere at any time.

The key with this exercise is to force yourself to not just train your brain to be aware of the 360 degree zone around you… but to also program yourself to recognize a threat and respond.

This is the kind of stuff that you don’t want to be doing for the first time when you find yourself in the middle of an attack, right?

It’s firearms training, and results, unlike anything you’ve ever seen before and are guaranteed to bring your skills to a whole new level of survivability!