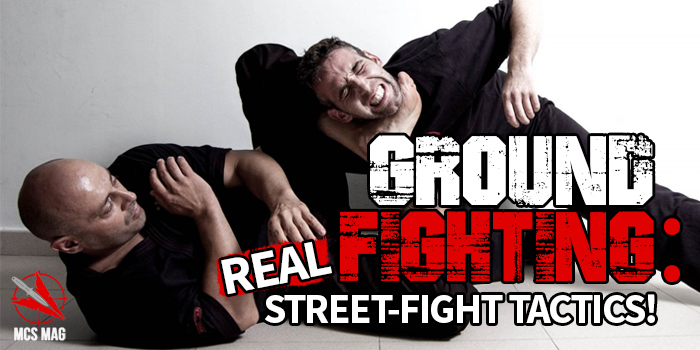 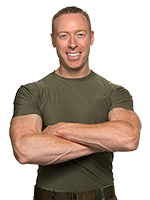 You’ve heard the statistics before, and most of them are made up on the spot.

“X percent of fights go to the ground!”

It’s hard to attach a real number to that, but in a real street fight, it is very likely you could end up on the ground.

On your back on the pavement is the last place you want to be.

You can’t fight back while you’re on the ground…

…and you could easily get stomped to death.

But, you might be saying, maybe I’m the one on top.

Maybe it’s him who’s on his back on the pavement.

Well, even if you have the opponent on his back and you are on top, your options are still limited.

I spoke with combatives expert Damian Ross about this, and here is a run-down of what he told me.

How To Pound A Grounded Attacker!

Fighting on the ground limits your ability to use your body’s weapons.

Even in a superior position, doing effective damage to the opponent can be hard.

There are certain strikes or attacks that work best on the ground when you’re on top of your attacker.

Using these could give you the advantage you need when you are essentially performing “the old ground and pound” on the enemy.

Until you find yourself in this position, you won’t be prepared for how what you might normally do won’t work well.

First of all, when you’re on top of a grounded attacker, use open-hand blows.

The reason these work is that they take advantage of the body’s natural weapons.

Your knuckles are relatively fragile, and if you strike something hard with them — like a skull — you run the risk of hurting yourself badly.

Unlike a closed fist, when you strike with the edge of the hand or the heel of the palm, you can hit a relatively hard object without hurting yourself.

There’s another reason that you need to use the heel of the hand or the edge of the hand, though, that has nothing to do with the skull and how hard it is.

If you miss the attacker’s head, you could strike the ground.

That means hitting pavement in a lot of cases, or at the very least a hard floor.

There is nothing worse than smashing your knuckles onto pavement.

You can’t operate a gun or effectively manipulate a knife after you’ve done that.

Use an arcing type of motion, not a linear strike.

(Avoid straight punches, in other words.)

That way, if you do miss the attacker’s face, you won’t be slamming your hand directly into whatever is on either side of it.

If he moves his head six inches to either side, it’s all over for your hand.

While you’re on top of your attacker, keep one knee up and one knee down.

This helps you maintain your balance.

When he covers up — and he’s going to, with you beating on him — hack his arm with the edge of your hand.

Move his arm out of the way and continue to target his neck and head.

Pin the arm if you can.

Once you get his arms out of the way, he’s done like dinner.

Remember, this isn’t a give and take like in sparring.

You have to tap into your natural bloodlust and go as hard as you can.

Even if you’re in great shape, a confrontation like this will leave you exhausted.

You’ve got to recover from the adrenaline dump and do what you have to do.